One of the opening numbers in this year's Raise Your Spirits production, COUNT the STARS, is a touching duet between our beloved Patriarch and Matriarch (played here by Avital Macales and Rachel Moore), just as they are embarking upon their lives of teaching and gathering souls under the wings of G-d.
Avram and Sarai have run from their home in Ur Kasdim, and stopped in Charan. Sarai looks around at her new unfamiliar surroundings and strange new life, and shares her thoughts of their alone-ness to her husband.
It's a sweet song, but it tries to convey the difficulties of Avram and Sarai's life. Theirs was an existence of constantly starting again. That is not easy for anyone. Theirs was an existence of always being different and separate and ostracized.
It was a very solitary life. The Stone Chumash says, "Though Avraham and Sarah had many disciples (we call them "souls" in our show), they were essentially alone; they could never blend into whatever culture surrounded them." They didn't have friends to share popcorn with on a Saturday night. 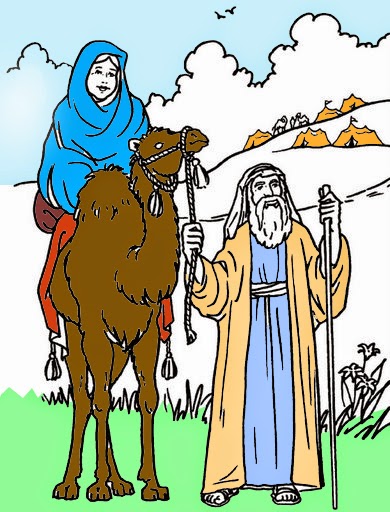 We are reminded that Avam is called Avram HaIvri, not only because he came from the other side of the Euphrates, but because he stood on "one side side of a moral and spiritual divide, and the rest of the world was on the other." He rejected a world of paganism and immorality for what HaRav Soloveitchik calls an "ethical life". And even though Hashem had never said one word to Avram, Avram knew that there was an Infinite Being that ruled the world. He was willing to endure ridicule, hatred and isolation to follow the ways of the Creator. So too, throughout the centuries, Jews have drawn inspiration from our Father Avraham and strengthened themselves to endure anti-Semitism, expulsion, pogroms and all kinds of abuse in order to remain faithful to G-d.
May the Jewish nation always have the fortitude to follow the path of good and of G-d.

Behind the Scenes at COUNT THE STARS: Me'arat HaMachpelah: http://youtu.be/yuj8NCQq_7M
Posted by Sharon Katz at 4:23 PM

Email ThisBlogThis!Share to TwitterShare to FacebookShare to Pinterest
Labels: Abraham Avraham Pirkei Avot Ethics of Our Fathers Kindness Loving-Kindness Positivity Lech Lecha Go for Yourself Go Inside Yourself

Sharon Katz
I AM A WRITER. Once upon a time, I kept up 4 blogs - each reflecting a different part of my life. I'm also founder of three performance companies and co-founder of a fourth. Now, as I’m busier than ever - creating, producing or performing. I RAISE SPIRITS, I'm a DAME who DANCES, I cheer on my NOARoked and I unite women through PERFORMANCE with WPC Jerusalem.